Roles are predefined sets of permissions. When you assign a role to a user, you can be sure that the user will be able to access only that information within the system which is necessary for them to do their work.

Usually roles are created based on the user’s job functions: sales manager, marketing team member, administrator. But this is not a strict rule. You can create as many roles as required and configure them according to the needs of your company. For how to create a role, see the Create a Role section of the Actions with Roles guide.

On each entity in the system a user can perform a certain set of actions. The set may vary for some entities but in general it looks as follows:

For each of this actions you can set an access level, thus defining the range of entity records a user can perform an action on: will these be only the records owned by the user themselves, records of the user’s division, all records in the system, etc.?

The picture below shows the scheme of how permissions for an entity may be configured: This is how the corresponding configuration looks on the interface for the Account entity:

Permissions of this type either define whether a user must have access to certain parts of the system (e.g., should they see the page with system jobs queue) or extend ‘action on entity’ permissions (e.g. should a user retain the ability to modify their own user profile if editing of user profiles in general is forbidden for them). Permissions of this type are also called ‘capabilities.’’ Capabilities can be either enabled or disabled for a role.

This is how capabilities look on the interface: 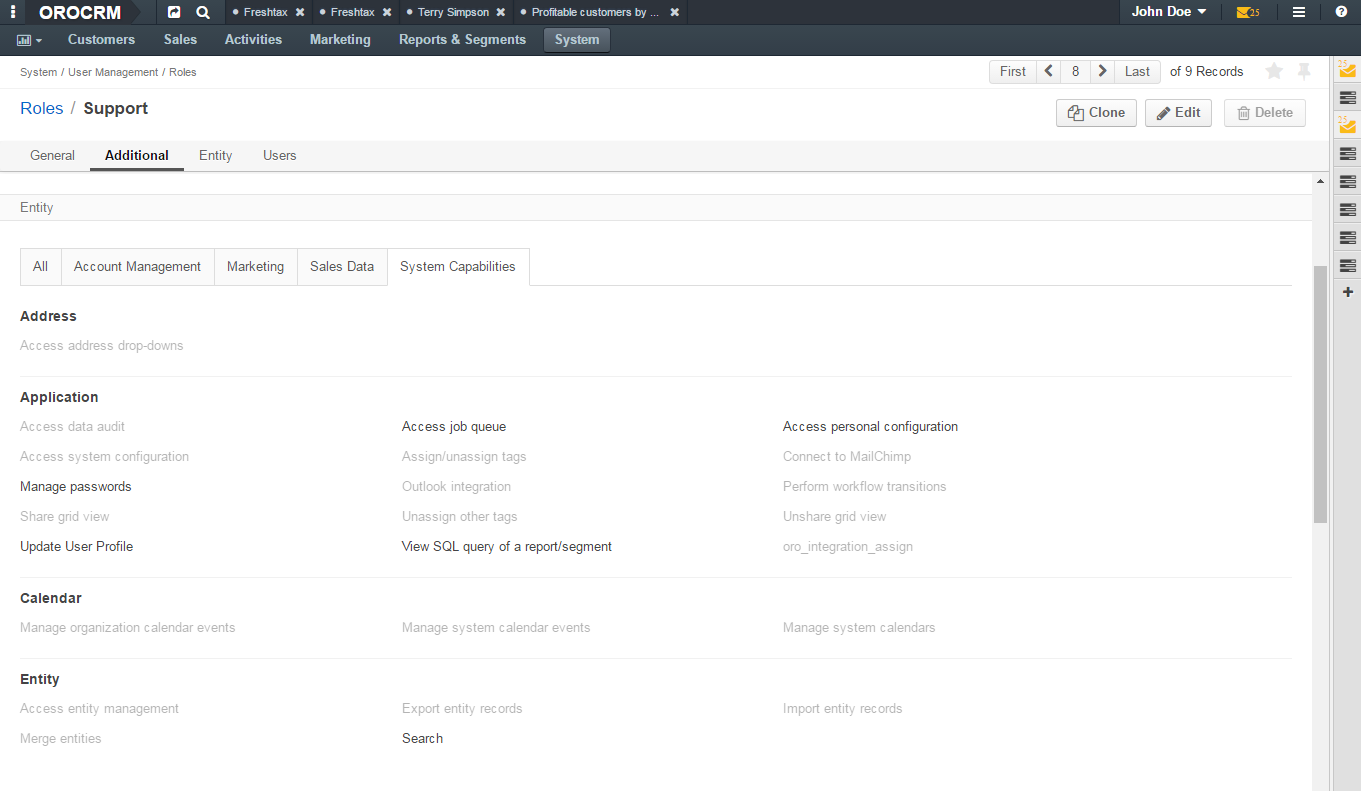 Each OroCRM user must be assigned a role. A user can have several roles. This is a logical approach if we assume that roles may be based on job functions. For example, if you have roles ‘Leads Development Representative’ and ‘Sales Representative’ and some employees do both of these jobs, you simply assign them both roles instead of creating a specialized role that will cover the whole range of required permissions. For how to assign a role to a user, see the Assign Roles While Creating a New User section.

If a user has two or more roles with different permissions, in the result the user will have the maximum of rights granted by all of them.

The following example shows what access level for an action on entity a user who is assigned two roles with different permissions will have:

All important information that comprises an entity is contained in the entity fields. For example, if you open any record of the Business Unit entity, you will see such fields as Name, Organization, Description, Website, etc.

When you include the permission to view entity records in a role, users with such role are automatically able to see all fields of the entity.

However, there are situations when it is desirable to hide certain fields from one group of users while still having them available for others. For example, both the sales team and support team require to see Opportunity entity records. But as the financial information is often considered sensitive, you may want to hide the Budget Amount field from the support team members.

Is is possible to do this using Field Level ACL functionality. When you enable it for an entity, you can assign permissions that allow actions on a particular entity field to a role.

For more information about the field level ACLs, see the Permissions for an Entity Field (Field Level ACLs) guide.