Each enterprise is structured in a meaningful way. Big enterprises usually have several branches/offices, each of which may be divided into several major divisions comprised of departments that may be comprised of several functional groups, etc. Even small companies organize their workforce into teams.

For example, a telecommunication service provider might have several subsidiaries, e.g. in each of the states. The Californian subsidiary may have two offices – Western and Eastern. In each of the offices there are unites working at different directions:

Each unit in its turn may be divided in teams, for example:

How Corporate Structure is Reflected in OroCRM¶

In OroCRM every business, division, or team of any kind may be represented by a business unit. The units can be hierarchically organized in a tree-like structure that reflects the actual subordination of the organization.

So, the system administrator usually creates such reflection of the organization’s hierarchy and defines what users belong to them. This affects the access and permissions granted to the users within the company.

For example, users assigned directly to the Eastern California business unit may see all the orders, requests and sales reported by any of the users of the unit and its child unit. Thus an office manager will see all the accounts created in any direction and by any kind of employee.

This will protect information on one hand, and help to protect users from being overwhelmed with non-relevant information.

Please refer to the Access and permissions guide
for more details.

By the user name, you can see the name of the business unit, that “owns” the user. This is also defined by the system administrator and serves as additional information for other users.

At least one business unit must be defined in the system.

In addition to the business unit hierarchy, OroCRM Enterprise Edition provides the ability to create several Organizations. Organizations may be described as large business units, independent enough in their operations to require a high degree of separation and customization. Organizations provide a much higher degree of separation – every organization in OroCRM is basically a business in its own right. They might have their own hierarchies of business units, use different languages and locales, or even the most common entities such as Contacts or Accounts may differ from one organization to another. Data records that exists in one organization are normally not available to another.

In many cases a user has access to a single organization. A sales representative in the U.S. office is likely to have no access to the company’s French division.

This feature is only available in the Enterprise edition.

For example, if you are working at the worldwide help desk of a multinational organization, you should be able to access customer records in all the organization within your company in order to open cases based on the customer requests. Similarly, if you are the CEO of a big enterprise comprised of multiple independent divisions, you would like to have access to every one of them in order to check their performance.

As organizations are often much bigger and more separated than business units, the user will have to switch to the necessary organization to work with data in each one of them.

The name of an organization you are currently working with is displayed in the top left corner of the screen. If you have access to multiple organizations, upon your first login you will see a note with your current organization. Three dots to the left are the organization selector. 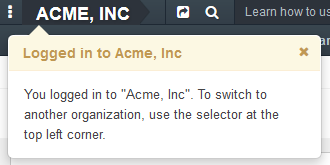 Click the selector, to see a list of organizations you have access to. Your current organization will be displayed in bold. If the global organization exists, it will be shown at the top of the list and shifted left. 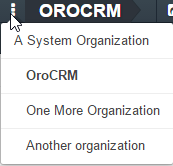 Work with the Global Organization¶

Global Organization provides users with simultaneous access to all the records of all the organizations they are assigned to. There cannot be more than one global organization in OroCRM.

When creating a record in the global organization, the user should select an organization to which the record will belong.